Advocating for your right to be free from gun violence

The Ohio Coalition Against Gun Violence is a 501(c)(3) non-profit organization, working to prevent gun violence through education, advocacy and public awareness.

The Ohio Coalition Against Gun Violence (OCAGV) is the state’s recognized resource for current information regarding gun violence and gun related legislation. The Coalition monitors current developments at the national and state levels, and provides statewide education on non-violence and safety for children and families. The Coalition works with other organizations and individuals to facilitate data collection and community solutions and to support public health recognition of the gun violence problem.

Read about our recent efforts in the Summer 2020 Newsletter.

The Ohio Coalition Against Gun Violence is frequently called upon by media for comments, especially relating to Ohio legislative actions. Check out OCAGV in the News 2020-2021. 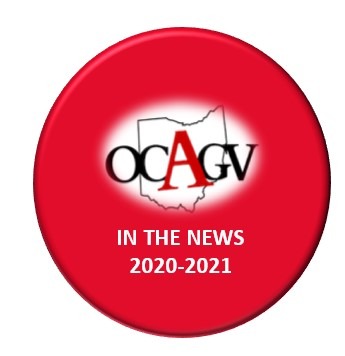 The Ohio Coalition Against Gun Violence (OCAGV) is a statewide nonprofit. OCAGV was founded in Toledo, OH in 1995 as a volunteer committee focused on the concern of gun violence that was being addressed by the Interracial Religious Coalition, a community organization promoting racial, ethnic, and religious harmony. The Ohio Coalition Against Gun Violence, operated under the auspices of the Toledo Metropolitan Ministry, and evolved into an independent nonprofit organization in 2002.

Our goal is to address the public safety issue of gun violence in Ohio. Through our education and advocacy work, we strive to end gun violence within our communities.

We share our position statements on issues relevant today:

The Ohio Coalition Against Gun Violence is committed to reducing gun violence by supporting equality and equity. While we are all created equally, we are not all treated equally and with equity. We endorse funding and activities designed to educate, enhance understanding of social injustice, create a deeper acceptance of diversity – whether it be race, ethnicity, gender, sexual orientation, disabilities or other identities – and a deeper awareness of mental health issues. We urge law enforcement to be educated as “peace” officers, practice non-violence and provide safety for all persons.

Suicide
The Ohio Coalition Against Gun Violence is saddened that suicide continues to be one of the leading causes of death in America – and that firearms are the most common method of suicide. Suicides occur across all ages, races, and socioeconomic groups. Mental health experts state that most individuals considering suicide try to talk to someone about such thoughts before they attempt suicide. We all need to listen to our loved ones, especially in times of emotional turmoil and uncertainty. We believe that preventing access to firearms will help deter suicide attempts. The heartbreak and devastation of suicide by a loved one can be harder to bear if the person died because of easy access to a gun in the household. We implore all gun owners to keep firearms away from loved ones, including children and those who may be experiencing mental anguish and emotional despair – and safely secure their unloaded firearm(s) in locked storage cases with ammunition stored separately.
Learn more here: https://ohioceasefire.org/resources/suicide-prevention/

Armed Staff in Ohio Schools
Ohio Coalition Against Gun Violence’s mission is to keep families safe. Our primary concern is our children. Over the years, we had a number of educational programs teaching kids what to do if they see a gun, if their friends are talking about using a gun to hurt themselves or others, and listening to them tell us about their experiences – and what they want to see happen to stop gun violence.  They have always told us they want peace and non-violence, and so do we. OCAGV opposes the Ohio law that allows guns to be carried in schools with permission of the school board. The information is kept secret from parents, teachers and other staff, as well as the community. Currently, legislators are considering reducing the training required for the people they allow to carry weapons. Allowing minimally-trained staff or volunteers to carry a concealed weapon into a school perpetuates the culture of violence and normalizes the behavior that as adults they will need to be armed. OCAGV believes trained resource officers should be the only ones armed around our children. An officer that is familiar to the children, all school personnel and parents and is accountable to the law enforcement agency that they work for is a safer environment and a far better example for our children. Years ago, OCAGV heard a doctor ask “When are we going to make our children more important than our guns?” We continue to ask that question and remain committed to putting our children first because they are the most important.

The Ohio Coalition Against Gun Violence is a founding member of States United to Prevent Gun Violence, a coalition of 32 state gun violence prevention groups.

OCAGV has collaborated with many Ohio and national groups to accomplish both advocacy and education initiatives and is a founding member of States United to Prevent Gun Violence. Our alliances include, but are not limited to: the YWCA, SAFE KIDS Coalition, Ohio Million Moms, Ohio League of Women Voters, the Interracial Religious Coalition, the Ohio Council of Churches, the Catholic Conference, The University of Toledo College of Law and College of Public Health, Lucas County Health Department and St. Vincent’s Mercy Health Partners Trauma Department. OCAGV works with numerous: gun violence prevention groups, legal advocates, health advocacy groups and consumer product groups throughout the nation. OCAGV also frequently partners with national organizations including Amnesty International, Brady United, the Coalition to Stop Gun Violence, the Community Justice Advocacy Fund, Everytown & Moms Demand Action, Giffords, and March for our Lives.