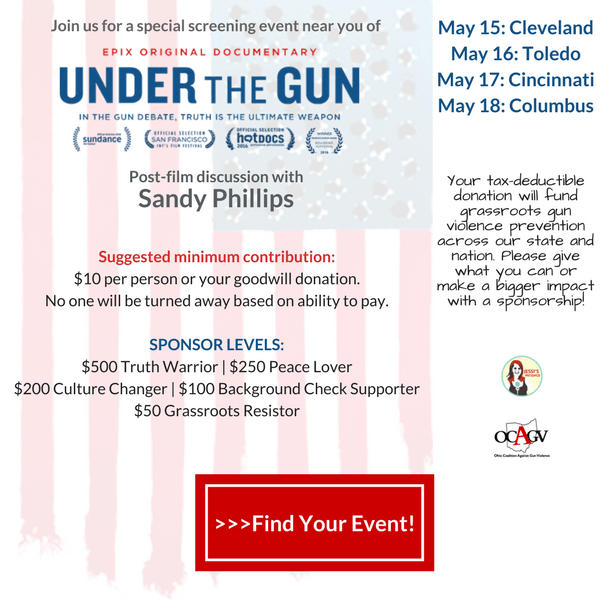 Big news! Sandy Phillips, the amazing gun violence prevention advocate who testified against the SCOTUS confirmation of gun lobby darling Neil Gorsuch, is coming to Ohio for events across our state! We’re teaming up for community events where we’ll be screening the award-winning documentary Under The Gun, giving updates about pending state and federal gun legislation, and giving Sandy the chance to share her story with folks across Ohio.

Lonnie and Sandy Phillips’ daughter, Jessica Ghawi, was murdered in the Aurora, Colorado theater massacre in 2012. Since then, they have become advocates for common-sense gun laws in America. Their non-profit, Jessi’s Message, allows them to take their trailer and travel the country telling their story and working with fellow victims and survivors of violence.

Under the Gun examines the events and people who have kept the gun debate fierce and the progress slow, even as gun deaths and mass shootings continue to increase. Through the lens of families impacted by the mass shootings in Newtown, Aurora, Isla Vista and Tucson, as well as those who experience daily gun violence in Chicago, the documentary looks at why politicians are finding it difficult to act and what is being done at the state and local levels. The film is executive produced and narrated by Katie Couric and directed by Stephanie Soechtig.

Click here to get details about the event in your part of the state and RSVP today!